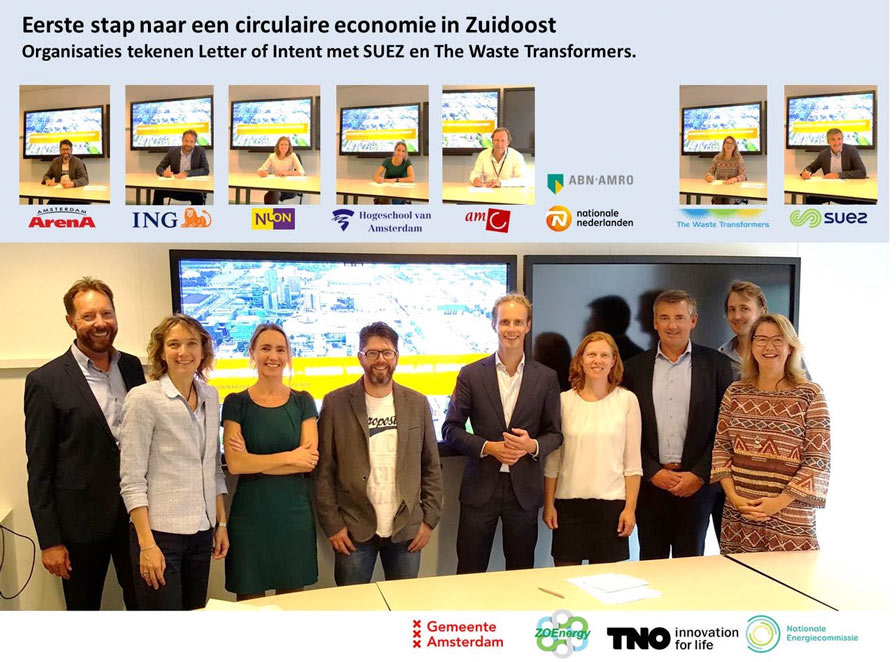 Using locally generated organic waste as a raw material, sounds like a good idea. And it is. The Waste Transformers on-site approach to converting waste into value, in installations the size of 20 foot shipping containers, makes the circular economy real whilst also creating a cleaner, greener environment as well as contributing towards making the area more livable. A number of organisations in Amsterdam Zuidoost are ready to take the first step. Together, they plan to collectively turn their organic waste into electricity, residual heat and compost, in a Waste Transformer that will be placed next to the football stadium. Theirs is a demonstration of responsibility, sense of entrepreneurship and ambition to innovate.

On the 24th of May, Amsterdam ArenA, ING, Hogeschool van Amsterdam, ABN AMRO, Nationale Nederlanden, AMC en NUON signed an official Letter of Intent to realise the ambition of being the first football stadium in the world to generate its own good energy from its waste.

The Waste Transformer, essentially a biodigester, will be responsible for the onsite transformation of organic raw material. This will translate into less transport and a significant reduction of emissions in the area and a great story for a football stadium that has already left its mark on the green energy map with its use of recycled batteries. The green energy and compost from the installation will be used to sustain the Amsterdam Zuidoost area. SUEZ will be responsible for operations.

The project is in its realisation phase.

Learn more about our Business in a box model