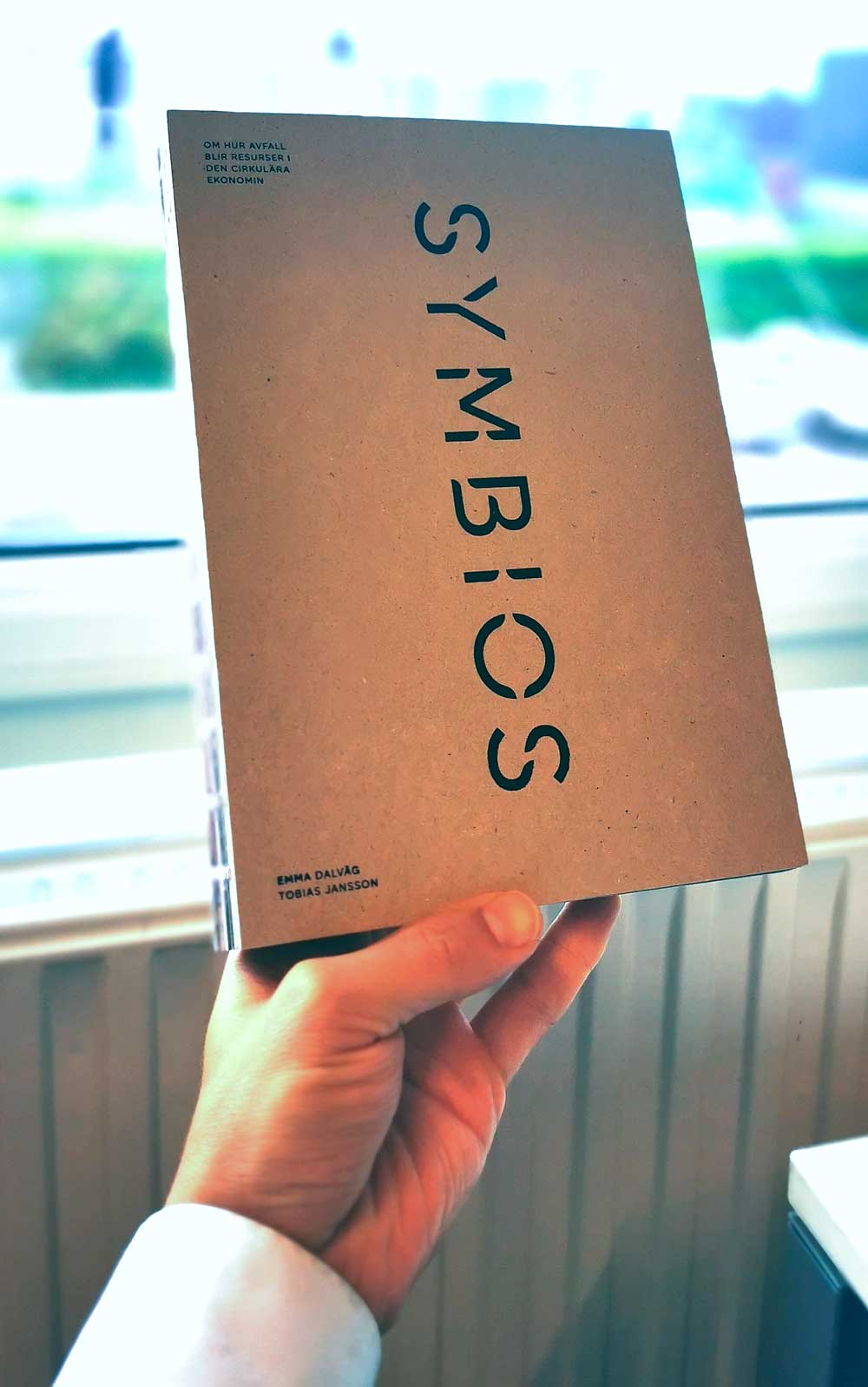 Shifting people’s attitudes towards sustainable behaviour is more likely to happen when they are informed and exposed to successful examples. Emma Dalväg and Tobias Jansson, have written this book about industrial symbiosis, where one’s company waste becomes another company’s resource, leading to profitable collaboration with sustainable advantages. In Swedish: Symbios. We are proud The Waste Transformers is featured in this book on how food waste can create symbiosis when used properly. We have translated the chapter in the book into English (with slightly adapted texts).

Symbios is aimed at professionals in, for example, municipalities and companies who have come into contact with the concept of industrial symbiosis and want to learn more, and people with a general interest in future issues, innovation and related areas. The book (Currently in Swedish) can be ordered at http://www.bokensymbios.se/

Lara van Druten, founder of The Waste Transformers, wants to revolutionize the way we handle food waste. By producing biogas and electricity from local food waste, the cycle is closed, at the same time people have the opportunity to create an income.

A young company from Amsterdam has developed a small-scale biogas plant for local food waste streams. The solution is decentralized, and is aimed at emerging economies where there is no waste management infrastructure, and at actors in developed countries who want to create a local food waste circular economy.

A Waste Transformer consists of a minimum of two 20” shipping containers, enabling to process a minimum 350kg/day. The design is modular and can process up to 3.000kg/day, by adding containers to scale up the system. Two main value streams are created from the food waste, one is biogas that can be used for air conditioning, cooking or locally produced electricity and heat. The second is the digestate which can be used as a natural fertilizer to replace fossil fuel-based fertilizers.

The technology is sold with a service agreement. In Africa, a model for “Rent to ownership”, called Business in a Box has been developed. An entrepreneur initially rents a Waste Transformer and operates it, and works towards ownership. The income it generates makes it possible for the contractor to buy the facility within a few years.

CEO and founder of The Waste Transformers. Has a strong personal drive to make the world a better place, both environmentally and socially. The commitment was awakened during her upbringing in South Africa, where she felt that there was so much untapped potential that was not taken advantage of, both in terms of waste and people. With her team, she wants to revolutionize the way we treat food waste. By producing biogas and electricity from local food waste, the cycle is closed, and at the same time as people have the opportunity to create a stable income.

[Symbios] How do you produce biogas in a Waste Transformer?

[LARA] We place a Waste Transformer at the site where food waste is produced, such as hotels, shopping malls, communities etc. First, we ask people to separate organic waste at the source, mainly food waste. The food waste is collected daily and a shredder grinds it into small pieces. The yoghurt-like substance that is created is automatically diluted with recycled water from previous cycles and pumped into the digestion chamber. There, anaerobic bacteria feast on the shredded food waste, these bacteria don’t require oxygen for growth. In that process, methane gas is created, which is a part of biogas.

[S] How to use the biogas? [L] It can be used in different ways. For example, we can separate some of the carbon dioxide present in the biogas and use the remaining gas to run a cooling system. That cooling system can provide an area or building with air conditioning. This is how we set up the project in the Middle East. The biogas can also be used for gas cooking stoves. My dream is that there will be small versions of our Waste Transformers in all the world’s kitchens… The third way is to use the biogas to generate green electricity that can be used to supply the building that produces the food waste with electricity, similar like solar panels on a building’s roof. As a surplus in electricity production, heat is created that can be used locally or sent out on a district heating network. [S] Can a Waste Transformer produce anything other than biogas? [L] We can capture the carbon dioxide, and for example, use it in greenhouses to replace the fossil-based carbon dioxide used today to grow plants. We also have the natural liquid fertilizer. The trick is to refine the digestate so that it is no longer smelly and makes all the fantastic natural nutrients it contains available to restore soil health, which is a global issue today. Then it becomes an alternative to polluting artificial fertilizer produced by fossil energy.

[S] How do you view your role as a startup company? [L] I am convinced that if we want to make the world more circular and green, we must start connecting large players and their food waste. If we do not, the wheel will never go in another direction. The interesting thing about smaller, younger, dynamic companies like ourselves is that we can adapt our solutions so that they fit into different technical interfaces. It is easier for us and it goes much faster than for the big industrial companies. This means that smaller, innovative and fast companies can really become important in the transition to a circular economy.

[S] In the new district Bajes Kwartier in Amsterdam, a Waste Transformer will be constructed inside a building. Tell me more! [L] It is a former prison area that is being converted into well over a thousand new homes. One of the former prison buildings is renamed the “Green Tower”. Inside the building runs an urban farm that is used by the restaurant located at the top of the tower. In the middle of the building, two large cylinders are installed that come up through the entry floor. These cylinders are part of our Waste Transformer. Our standard containerized installations do not fit into the old structure of the prison cell blocks, so we use the concrete prison cell as a technical chamber. Food waste from the city district will be collected by people with a distance to the labour market. The food waste is then treated by them inside our Waste Transformer. The electricity generated is used for electric cars in the neighbourhood and the heat is sent out to the district heating network. The digestate is used as a natural fertilizer for the urban farm and local greens. A bonus is that climbing walls are built on the outside of our cylinders.

[S] What does your business model look like in emerging economies? [L] We have developed something we call “Business in a Box”. It’s about working with social entrepreneurs to enable them to finance a Waste Transformer and give them a salary until the installation is paid off. They repay a loan to us through the income the Waste Transformer creates and at some point the ownership is transferred completely to them, a so-called “rent to ownership model”. We want to enable green local jobs and local ownership. It enables young people to take responsibility for keeping their own neighbourhoods clean while producing locally produced electricity and natural fertilizer for food production. That really shows our ‘Waste to value’ slogan.