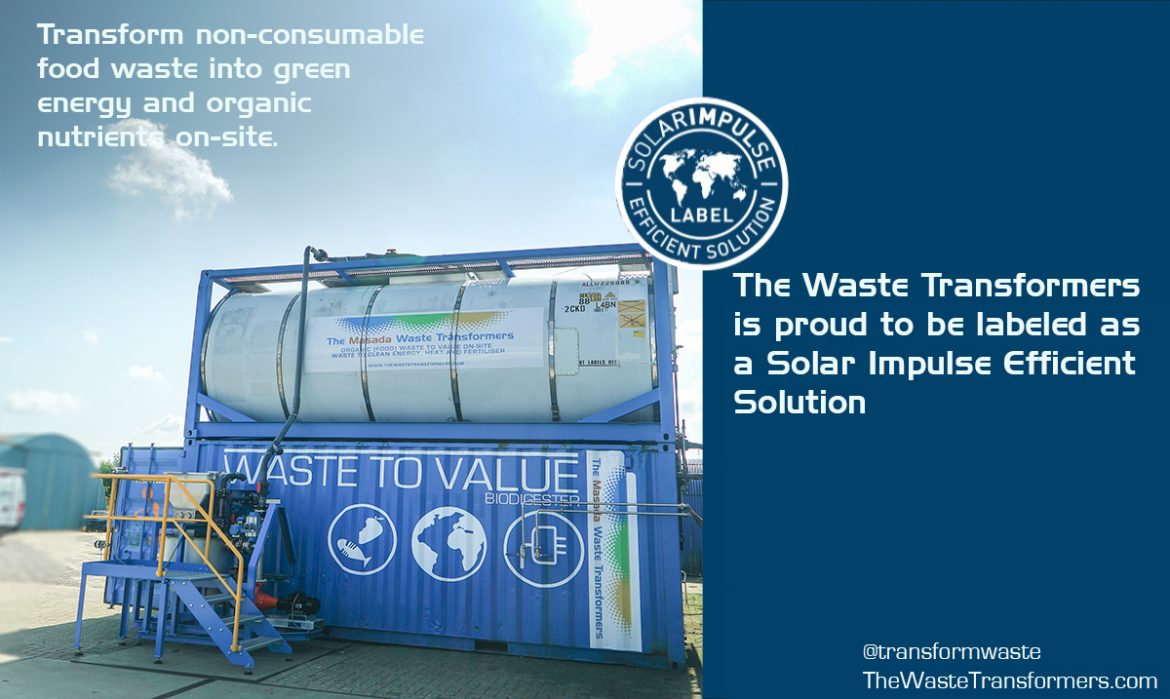 The Solar Impulse Foundation set the challenge to select 1000 solutions, that can protect the environment in a profitable way and present them to decision-makers to fast-track their implementation. We are thrilled to announce The Waste Transformers is now officially labeled as a Solar Impulse Efficient Solution.

Our Waste Transformers are modular containerized anaerobic digesters, that transform organic (food)waste where it is produced (think of hotels, malls, events, airports). This means, companies and communities can stop transporting their organic waste on dirty diesel to landfill. They can now extract (financial) value from their own waste.

Assessed by independent experts, the Solar Impulse Efficient Solution Label, serves as a credible marker of quality to decision-makers in business and governments. The report from the experts who have reviewed The Waste Transformers’ tech and business, shows The Waste Transformers is formally validated based on multiple criteria:

The solution provides an environmental-friendly and circular alternative to the many different options that can be applied to the management and evaluation of food waste treatment such as incineration or recycling into bio-based products. The process of using anaerobic digestion is indeed widely considered as the most suitable solution because of its environmental benefits. Food waste digestion is now commonly undertaken commercially at a large scale. A second benefit of the digestion process is that it allows the return of plant nutrients to farms since the digestate can be applied as a nitrogen-rich fertilizer product without risk to animal health or the environment when the production process is properly controlled and regulated (1). The solution can therefore perfectly be constructed and operated as designed. The solution is also particularly interesting because it proposes a small and modular “plug & play” system, which can be placed close to the production of food waste (restaurants, hotels, hospitals, food producers, farmers, etc.) and thereby not only avoids the transportation of waste to centralized transformation plants, but also represents extremely attractive waste management and treatment solution to developing countries where food waste represents a predominant portion of generated waste and where waste management collective infrastructures are lacking. The solution has passed through the technical barriers and has reached commercialization. It has already been successfully installed and operated in various sites across different countries.

The Waste Transformer is scalable for three main reasons: (1) food waste is an abundant source of raw material for biogas production, an estimated 1.3 billion tons of food waste are produced annually on a global basis, representing one-third of the world food production (FAO, 2011), (2) its has an ingenious and innovative modular design, which allows for the treatment of increasing amounts of food waste just by adding modules to the installation, and (3) it targets underdeveloped countries where food represents the most important source of waste, as exemplified by the Waste Transformers’ case of the city of Freetown, where the one million estimated population generates over 990 tons/day of garbage with over 84% is biodegradable organic waste. Besides the opportunity for scaling up the solution in developing countries, the innovators are also targeting restaurants, kitchens, food producers, farmers in developed countries.

Discharge of waste in general, and food waste, in particular, is considered one of the major environmental problems today, as waste generation increases continuously, reaching values of 32% of all food produced worldwide (FAO, 2011). While the quality of available data varies, estimates suggest the total is around 1.3 billion tons. Food losses occur at all stages of production, from pre-harvest on the farm through to postharvest losses during processing, distribution, retailing and consumption. Compared to the reference case of landfilling or incinerating food waste or even to existing so-called green solutions aimed at recycling food waste into bio-based products, which may eventually end up being landfilled; the Waste Transformer delivers true incremental environmental benefits: As outlined, by several researchers in a recent report on the role of anaerobic digestion and biogas in the circular economy: “Biogas from anaerobic digestion is not merely a concept of production of renewable energy; it cannot be compared to a wind turbine or a photovoltaic array. Nor can anaerobic digestion be bracketed as just a means of waste treatment or as a tool to reduce greenhouse gases in agriculture and in energy. It cannot be pigeonholed as a means of producing biofertilizer, or as a means of protecting water quality in streams and aquifers. It is all these and more” (1). The multi-functionality of the Waste Transformer is its clearest strength environmental wise. Sustainable biogas systems from anaerobic digestion such as proposed by the Waste Transformers, include processes for treatment of waste, for protection of the environment, for the conversion of low-value material to higher-value material, for the production of electricity, heat and of advanced gaseous biofuel. The flexibility and modularity of the anaerobic digestion system and its ability to digest a multitude of organic feedstock, while producing a significant range of products ensures the role of anaerobic digestion and biogas in the circular economy. Finally. Because it can be installed close to the production of food waste (restaurants, hotels, hospitals, food producers, farmers, etc.), it also allows avoiding the emission of CO2 linked to the transportation of waste to centralized transformation plants. In addition, on a social point of view, such installations create local job opportunities in general and for low-skilled workers in particular and because they can be installed close to people they tend to drive behavioural change and the generation of less food-related waste. (1) Fagerström, A., Al Seadi, T., Rasi, S., Briseid, T, (2018). The role of Anaerobic Digestion and Biogas in the Circular Economy. Murphy, J.D. (Ed.) IEA Bioenergy Task 37, 2018: 8.

There are many hidden benefits for the society such as: – multiple environmental benefits during the solution use phase in comparison to the conventional counterparts, especially for developing countries. – creation of jobs related to the operation, maintenance and management of the units. – the solution owners or beneficiaries can reduce their bill for conventional energy consumption, waste management and selling the fertilizer.

Besides our on-site organic waste to value technology, there are numerous other cool innovations that help to limit climate change as much as possible. Climate change is an immeasurable problem, which cannot be limited by one technology only. For this reason, the Solar Impulse Foundation gathers #1000Solutions that combined will change the world.